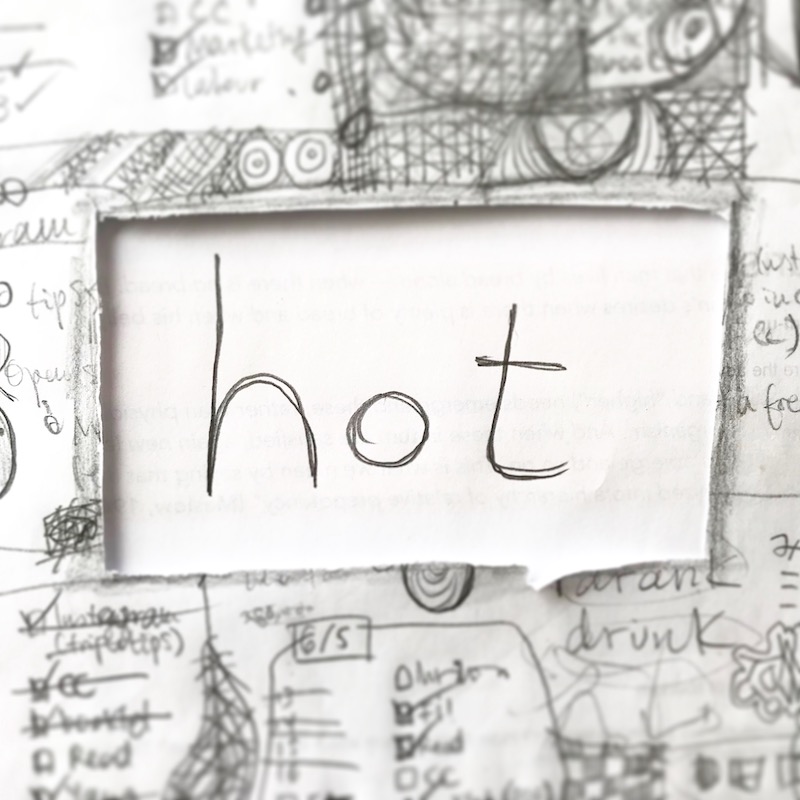 今週の #WOTW は「hot」です。’Hot’ is a very common adjective that is used in quite a few phrases. It might come as a surprise that it can also be a verb. A verb? Well, keep reading!

Let’s have a look at the adjective first.

- Tokyo is so hot in summer. (Having a high degree of heat or a high temperature.)

- Have lots of water when you feel hot. (Feeling an uncomfortable sensation of heat.)

- Oden is usually hot as it is a winter food, but isn’t it also as good cold? (Prepared by heating and served without cooling.)

- I can’t eat hot curry. (Containing or consisting of pungent spices or peppers which produce a burning sensation when tasted.)

- His speech made the audience hot. (Filled with passionate excitement, anger, or other strong emotion.)

- Immigration policies are a hot issue. (Involving much activity, debate, or interest.)

- I’ve got hot news about Sally! Do you wanna hear them? (Fresh and of great interest.)

- This kind of sunglasses are hot right now. (Currently popular, fashionable, or in demand.)

- He’s so hot, no wonder all the girls want him. (Sexually attractive.)

- He knows nothing about science, but he’s very hot on history. (Very knowledgeable or skilful.)

- Japan is very hot on illegal drugs. (Strict about.)

- It’s a hot area that no-one wants to cover, so usually newbies are assigned. (Difficult to deal with.)

Now, before having a look at some of the many phrases using ‘hot’, let’s have a look at a specific, geographically speaking, way of using hot as a verb. It might sound like a mistake children make, but it’s totally fine to say it… in Britain. It’s also informal and usually followed by the preposition ‘up’, mind you.

- The championship hotted up when Brazil and Germany were eliminated. (Become hot, exciting.)

- The campaign is hotting up and candidates are stepping up. (Become more competitive.)

Now, for the phrases.

- [go hot and cold] When I saw her I went hot and cold. I thought she was dead! (Experience a sudden feeling of fear or shock.)

- [hot and heavy] The conversation became hot and heavy when we touched on the issue of gay marriage. (Intense; with intensity.)

- [hot off the press (or presses)] Triplo’s new leaflet is hot off the press. (Newly printed or published. This can also bemused for items not related to printing, such as clothes, when they’re new.)

- [hot to trot] So, when are we starting? I’m hot to trot. (Ready and eager to engage in an activity.)

- [in hot pursuit] I followed in hot pursuit until I finally caught up with him. (Following closely and eagerly.)

- [in hot water] You’re in hot water, young lady. You know that, right? (In trouble or disgrace.)

- [make it (or things) hot for] You’re making things hot for me when you show up without notice and get so drunk in front of everybody. (Stir up trouble.)

今週の #WOTW は「campaign」です。’Campaign’ is a noun, a verb, and it’s used in at least one phrase. It also has a G there in the...

今週のWOTWは ‘part’ です。’Part’ is a noun and a verb, but it can also be an adverb. It is used in quite a few phrases too....