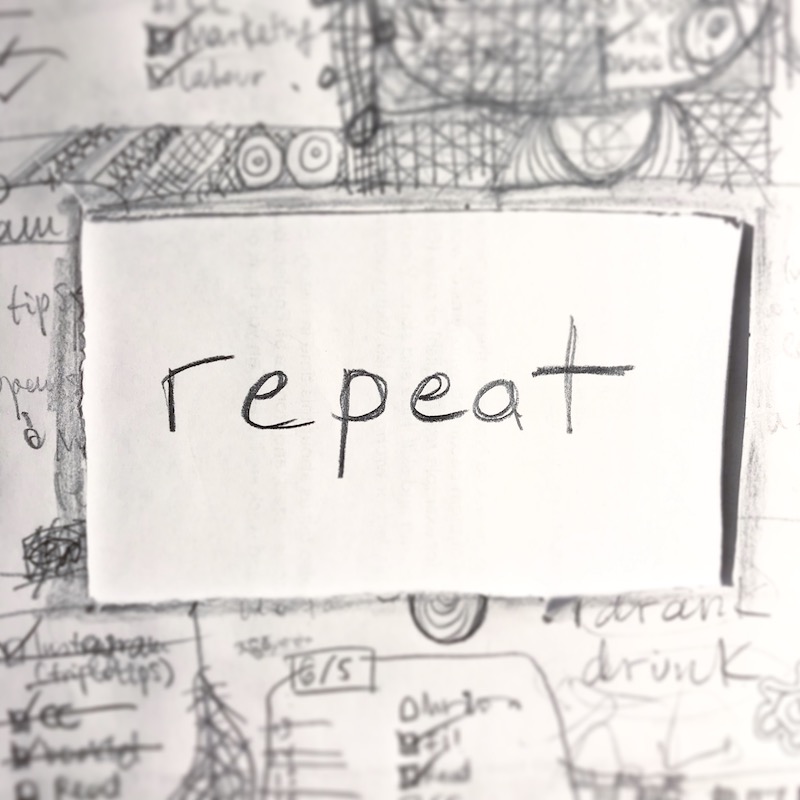 今週の #WOTW は先週の「repeat」です。It is most commonly used as verb, but it is also a noun. At this rate we’ll have to repeat some of the WOTWs!

- Could you repeat that, please? (Say again something one has already said.)

- You’re just repeating what you’ve read. What do you really think? (Say again something said or written by someone else.)

- It’s a shame that he’s repeating himself. He used to be such an original performer. (Repeat oneself: Say or do the same thing again.)

- Do not, repeat, do not open the window. (Used for emphasis.)

- I had to repeat one year in high school. (Do a course or period of instruction again.)

- The history book on the shelf it’s always repeating itself. (Repeat itself: Occur again in the same way or form.)

- I love curry, but it always repeats on me. (Be tasted intermittently for some time after being swallowed as a result of belching or indigestion.)

Now, let’s have a look at the noun.

- The workshop will be a repeat of last year’s. (Something that occurs or is done again.)

- Last night I binge watched repeats of The Simpsons. (A repeated broadcast of a television or radio programme.)

- Repeat offenders are more likely to end up in jail. (Occurring, done, or used more than once. This one is a modifier)

- She likes to wear flower repeat patterned blouses in Spring. (This one is also a modifier used when talking about a decorative pattern which is repeated uniformly over a surface.)

- Play the whole score all over again after the repeat. (A mark on a music sheet indicating a passage to be repeated.)

今週の #WOTW は「immerse」です。’Immerse’ is a verb. Its primary meaning is to go in and under the water, but it can also be used...