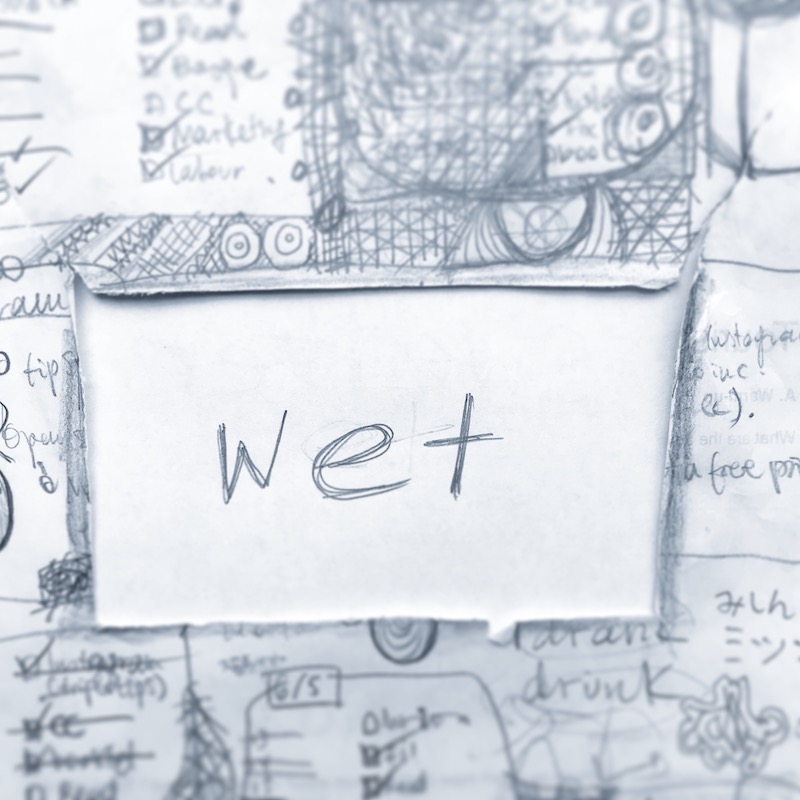 今週の #WOTW は ‘wet’ です。’Wet’ is a word that we are bound to use a lot these days, being as we are in the middle of the rainy season. It’s also one of those English words that can be more than one and even more than two parts of the speech. In this case, we find ourselves facing an adjective, a verb, and a noun. It is also to be found in a few phrases. If you feel that is something that might interest you, keep on reading!

- The streets are wet. I must have rain during the night. (Covered or saturated with water or another liquid.)

- Don’t sit on the bench. It’s still wet. (When paint, ink, plaster, or a similar substance hasn’t yet dried or hardened.)

- Can you change the baby? I think she’s wet. (When a baby or young child pees in its nappy or underwear.)

- Be patient with him. He’s rather wet. (This is informal British English and it refers to someone showing a lack of forcefulness or strength of character. Someone feeble or weak.)

- Being a dry alcoholic is hard, but it was much worse when I was a wet one. (A person addicted to or drinking alcohol.)

Next is the verb.

- Anyone who wets their fingers to flick the page hasn’t read Eco’s ‘The Name of the Rose’. (Cover or touch with liquid, moisten.)

- Wet the hair before applying the product. (See above.)

- I wet myself, you’re so funny! (Urinate involuntarily, usually from laughing or fear. We can find something or someone funny or scary without actually literally wetting ourselves and still express it.)

The noun is next.

- I could feel the wet of his breath close behind me, but I didn’t want to look. (Liquid that makes something damp.)

- Do you wanna go for a wet? (This is informal and British English. It means ‘a drink’).

- You’ve let Charlie in the team?! What good is he to the campaign? He’s such a wet. (This is also informal and also British English. It refers to someone lacking forcefulness or strength of character.)

- Hopefully the wets will vote for marriage equality tomorrow. (Conservative with liberal tendencies.)

- You can be a Muslim and a wet. (In US American English, a person opposed to the prohibition of alcohol.)

- [wet the baby's head] Let’s wet the baby’s head! (This is British English and informal. It means to celebrate a baby's birth with a drink, typically an alcoholic one.)

- [wet behind the ears] Hiring someone fresh from uni means you will have to train them, but since they’re still wet behind the ears, you can mould them more easily. (This i informal. It’s used to refer to someone who is lacking experience or immature.)

- [wet one's whistle] What’s left of life when a man can’t wet his whistle with the lads down the pub, eh? (Informal. Have a drink.)

- [wet through (or to the skin)] Oh my God, you’re wet to the skin! Go dry yourself before you catch pneumonia. (With one's clothes soaked, completely drenched.)

今週の #WOTW は「bonkers」です。’Bonkers’ looks like a plural noun, but it’s actually an adjective and an informal British...