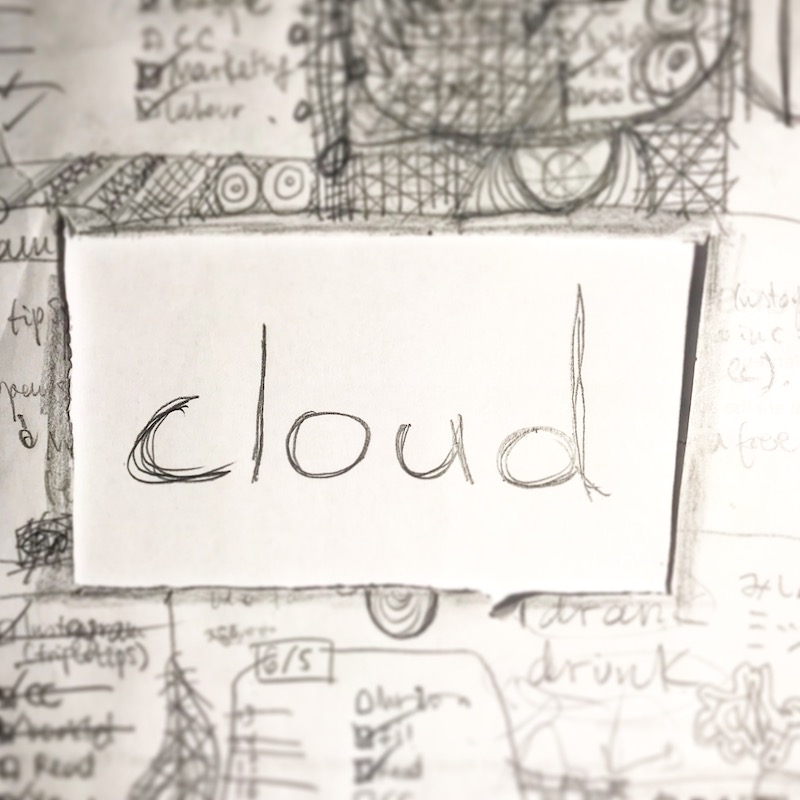 今週のWord of the Weekは「cloud」です. “Cloud” can be a noun and a verb. It is also to be found in a couple of lofty sayings. Let’s have a look at the noun first. Ready? Or are you in the clouds?

- Look at those dark clouds. Do you think it’s going to rain? (A visible mass of condensed watery vapour floating in the sky, typically high above the the ground.)

- Her fairy godmother appeared in a cloud of pink smoke. (An indistinct or billowing mass of smoke or dust.)

- Won’t you have a shower? There’s a cloud of flies following you. (A large number of insects or birds moving together.)

- There’s always a cloud on the horizon of my visa status. (A state or cause of gloom, suspicion, trouble, or worry.)

- The black cloud of inflation is making economic recovery slow. (A state or cause of gloom, suspicion, trouble, or worry.)

- A cloud passed over his face when the manager told him they had to talk. (A frowning or depressed look.)

- I have all my photos in the cloud. (Used with ‘the’, a network of remote servers hosted on the Internet and used to store, manage, and process data in place of local servers or personal computers.)

- a: Would you like some milk in your tea?
- b: Just a cloud, thank you. (The effect an opaque substance makes when in contact with a transparent substance)

Now, the verb is very interesting.

- It’s a shame it’s clouded over like this. We were having such a great time at the beach. (Become overcast or gloomy.)

- She put the milk in the tea, clouding it a little. (Make or become less clear or transparent.)

- His eyes clouded with tears when he heard the news of her death. (Fill up with tears.)

- The manager’s taste in women clouds his judgement when it comes to hiring. (Make (a matter or mental process) unclear or uncertain.)

- His face clouded when he overheard the manager talking about restructuring. (Of someone's face or eyes, show an emotion such as worry, sorrow, or anger.)

Let’s have a look at a couple of phrases.

- [in the clouds (or to have one’s head in the clouds)] They say my head’s in the clouds, but I’m keeping one foot on the ground. (Out of touch with reality.)

- [on cloud nine (or seven)] She’s on cloud nine since she found out that she’s getting a promotion. (Extremely happy.)

- [under a cloud] Once powerful men in Hollywood are now under a cloud. (Under suspicion or discredited.)

今週の #WOTW は 'chap’ です。’Chap’ is a verb and a noun. The noun has three different meanings and they have nothing to do...

今週の #WOTW は先週からつつけます。You might remember that we talked about the word ‘step’, the verb, the noun, and some phrases....