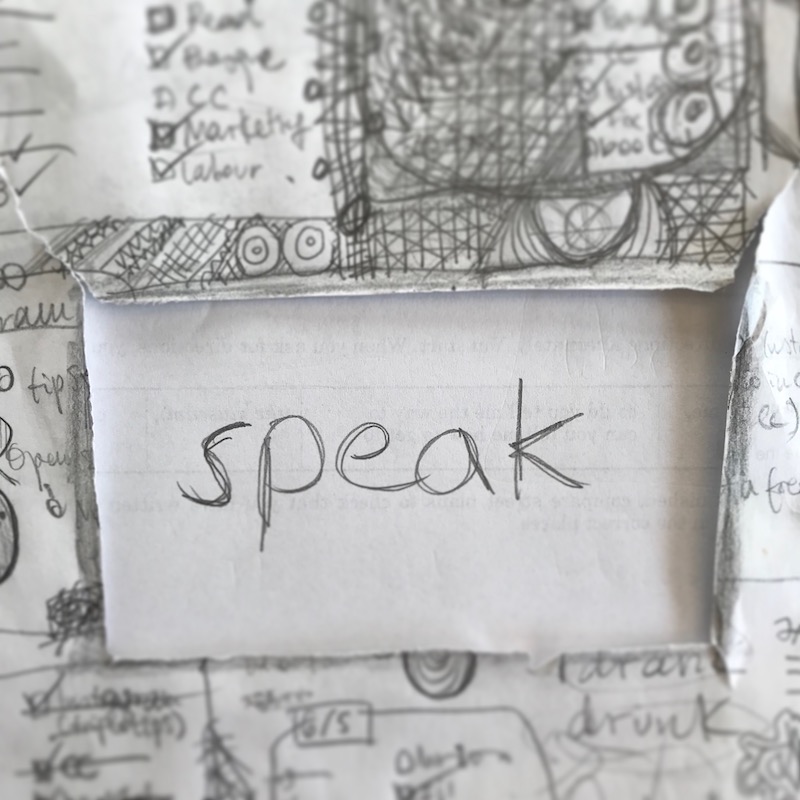 今週の #WOTW は「speak」です。’Speak’ is a verb we all know but, do you know what prepositions to combine it with and how to use it in phrases? No? Worry no more and keep reading!

- I won’t speak until my lawyer is here. (Say something in order to convey information or to express a feeling.)

- We need to speak. When do you have time? (Have a conversation.)

- I can’t speak in front of people. (Make a speech or contribute to a debate.)

- Thank you, but I don’t need you to speak for me. (Express the views or position of another.)

- The book speaks to the issue of homelessness. (Answer a question or address an issue or problem.) It also speaks of loneliness in big cities. (Mention or discuss in speech or writing.)

- I need to speak to my kids about the telephone bill. (Talk to in order to reprove or advise.)

- That film speaks to me in a way I cannot explain. (Appeal or relate to.)

- Her diary spoke of abuse and bullying. (Serve as evidence for something.)

- His eyes spoke anger. (See above. Also, show or express.)

- It takes a certain amount of practice to make a trumpet speak. (Of a musical instrument or other object makes a sound when functioning.)

- My dog only speaks when I ask him questions. (Bark.)

- [not to speak of] Writing kanji is difficult, not to speak of all the different pronunciations. (Used in introducing a further factor to be considered.)

- [speak for oneself] Am I speaking for myself if I say that the food was not good at all at the party? (Give one's own opinions.)

- [something speaks for itself] Here’s a photo of you the detective took. I don’t think I have to explain it to you. I mean, it speaks for itself, doesn’t it? (The implications of something are so clear that no supporting evidence is needed.)

- [speak for yourself]
A: I think we can all agree she’s not a good candidate.
B: Speak for yourself. I happen to think she’d be a great addition to the team. (Used to tell someone that an opinion they have expressed is not shared by oneself. Imperative.)

- [speak in tongues] …and then, after the little girl goes in a trance, she starts to speak in tongues. It's so scary! (Speak in an unknown language during religious worship.)

- [speak ill of] He might smile at you, but he speaks ill of you at the pub. (Criticise.)

- [speak one's mind] No politician speaks their mind nowadays. They only say what their strategists tell them to. (Express one's opinions frankly.)

- [(nothing, none, no…) to speak of] Do I have a girlfriend? Um, none to speak of. (Used to indicate that there is so little of something that it is hardly worth mentioning.)

Last but not least, the phrasal verbs.

- [speak out (or up)] How can a leader be taken seriously if she never speaks out against injustice? (Express one's opinions frankly and publicly.)

- [speak up for] You didn’t speak up for me. That, I will never forgive you. (Speak in support of.)

今週の #WOTW は ‘gaze’ です. `Gaze` is a verb and a noun with similar meanings. Have a look and find out.

今週の #WOTW は、もう一回「back」ですけど、最後のです！約束！We’re saying bye to this word by having a look at the phrasal verbs....

Out with the old and in with the NEW! ２０１９年の初めのWOTWは ‘new’ です。’New’ is an adjective, but it can also be an adverb....