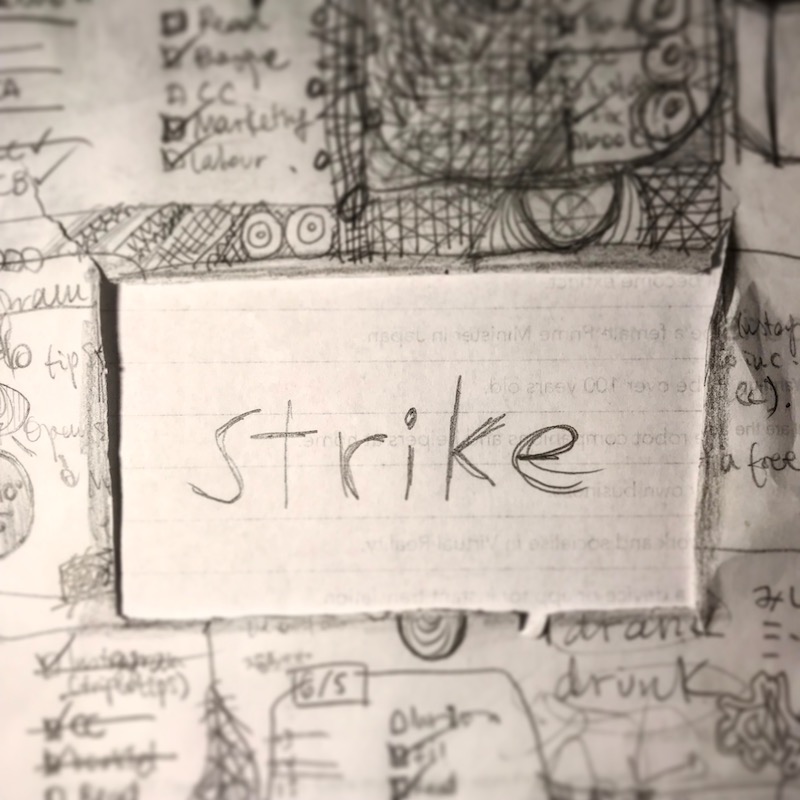 - I don’t remember anything after the soldier struck me with his gun. (Hit forcibly and deliberately.)

- I was very lucky that I didn’t strike my head against the pavement when I fainted in the street. (Accidentally hit a part of one's body against something.)

- There is a lot of wildlife around here, so it’s sadly not uncommon to strike animals with your car. (Come into forcible contact or collision with.)

- His eyes really change colour when they’re struck by the light. (When a beam or ray of light or heat fall on an object or surface.)

- I pity the goalkeeper that’s in front of him when he strikes that ball. (Hit or kick a ball.)

- The audience went crazy even before she struck the first note. (Produce a musical note by pressing or hitting a key.)

- Where were you when the Great Tohoku Earthquake struck? (When disasters, diseases, or other unwelcome tragedy occur suddenly and have harmful or damaging effects.)

- Are ebola-struck areas safe to travel to? (See above.)

- It’s a paradox when a Nobel Peace Prize orders drone strikes. (Carry out an aggressive or violent action, typically without warning.)

- I was so struck dumb by her explanation. I didn’t get a thing she said. (Cause someone to be in a specified state.)

- It didn’t strike me until I read her message a second time. (When a thought or idea comes into the mind of someone suddenly or unexpectedly.)

- During the interview, it struck me that she didn’t really want the job. (Cause someone to have a particular impression.)

- I’m struck on Lucy. Do you think she’d be interested? (Be deeply fond of or infatuated with. This is informal.)

- He leaves the office when the clock strikes five. (When a a clock indicates the time by sounding a chime or stroke.)

- They say that you can scare a lion away by striking matches and throwing them at him. (Ignite a match by rubbing it briskly against an abrasive surface. It can also used when a fire is started by rubbing or friction.)

- Are you going to strike on Friday? (When employees refuse to work or students refuse to go to school as a form of organised protest, typically in an attempt to obtain a particular concession or concessions from their employer or the government.)

- Please strike my name from the list. I can’t come to the party. (Cancel, remove, or cross out with or as if with a pen.)

- If I strike this deal, I will be able to retire before 40. (Reach, achieve, or agree to something involving agreement, balance, or compromise.)

- After 7 hours on the night bus, we struck Kyoto early in the morning. (Come to or reach.)

- Everybody had to wait for me to strike camp since it was my first time taking down a tent. (Take down a tent or the tents of an encampment. It can also be used with theatrical sceneries.)

- You can make pineapple leaves take root by striking them in soil but, do they actually make a new pineapple? (Insert a cutting of a plant in soil to take root.)