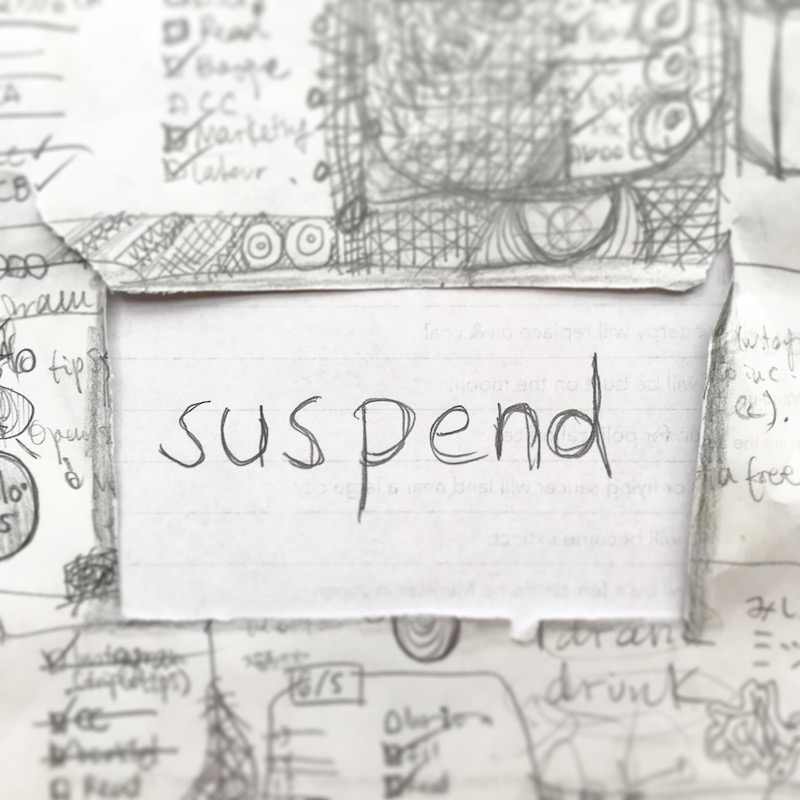 - Boris Johnson wanted to suspend parliament. (Temporarily prevent from continuing or being in force or effect.)

- The policeman was suspended on corruption charges. (Officially prohibit someone from holding their usual post or carrying out their usual role for a particular length of time.)

- The train service has been suspended due to an earthquake. (Defer or delay an action, event, or judgement.)

- The judge suspended the sentence for one year on the condition that she didn't leave the country. (When a judge or court cause an imposed sentence not to be enforced as long as no further offence is committed within a specified period.)

- The heavy chandelier was suspended from a ceiling full of woodworms. That’s why it collapsed. (Hang something from somewhere.)

- The roses, suspended in the water created a beautiful effect. (Solid bits of something dispersed throughout the bulk of a fluid.)

- A: What does this sign mean?
- B: It means the note is suspended. (In music, prolong a note of a chord into a following chord, usually so as to produce a temporary discord.)

Let us leave you with two phrases:

- [suspend disbelief] In order to enjoy this movie, you really need to suspend your disbelief. (Temporarily allow oneself to believe something that is not true, especially in order to enjoy a work of fiction.)

- [suspend payment] The company has suspended payment and international markets are panicking. (Cease to meet its financial obligations as a result of insolvency or insufficient funds.)

- [suspend payment] It looked as if Greece was going to suspend payment of its international dept, but then it agreed to the European Union's conditions. (See above.)

今週の #WOTW は「expect」です。Were you expecting the verb ’expect’? Hopefully your answer is ‘yes’! Let’s have a look....